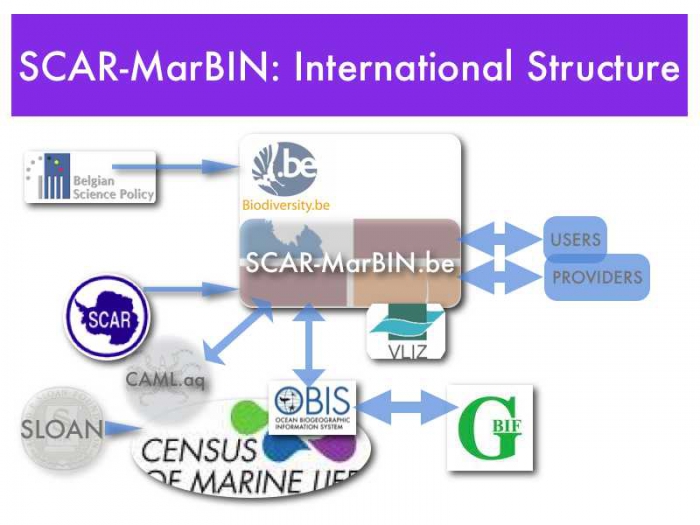 SCAR-MarBIN International Structure
Description SCAR-MarBIN is involved in a series of international initiatives, projects or institutions, through which the Network is funded, advised or fed with data. SCAR-MarBIN was established under the aegis of the Scientific Committee on Antarctic Research (SCAR). SCAR-MarBIN is funded by the SLOAN foundation through the Census of Marine Life (CoML), SCAR, and the Belgian Science Policy (BELSPO). SCAR-MarBIN is implemented within the Belgian Biodiversity Platform (the Belgian GBIF node), in very close collaboration with the Flanders Marine Institute (VLIZ, the European OBIS node). SCAR-MarBIN complies with biodiversity data exchange standards, which allows seamless communication with broader biodiversity initiatives, such as the Ocean Biogeography Information System (OBIS) or the Global Biodiversity Information Facility (GBIF). In the Framework of the International Polar Year (IPY), SCAR-MarBIN also closely collaborates with the Census of Antarctic Marine Life (CAML) project, and will live as its legacy after the IPY. Author Bruno Danis ·

This work is licensed under a Creative Commons Attribution-Noncommercial-Share Alike 4.0 License
Click here to return to the thumbnails overview